BACKGROUND TO THE YATE - GENIERI LINK

Genieri is a village almost 100 miles from the coast in the West African republic of The Gambia.

The first contact between Yate and The Gambia was in 1986 when a group of sixth formers from Brimsham Green Secondary School in Yate, together with four members of staff and Canon Grant, then the Rector of Yate, went to the country to carry out a survey on subsistence agriculture. The following year the link between Yate and Genieri was formed and Yate Town Council adopted the Link at a joint signing ceremony at which Genieri was represented by Chief Seyfo Sherrif Sanneh. Committees were set up in the two communities with the help of Margaret Haswell MBE who had close connections with Genieri, having been stationed there in 1947.

The Link was granted charitable status by the Charities Commission in 1996.

Many individuals from Yate have been to Genieri to meet villagers, form friendships and take part in projects started jointly with their counterparts in Genieri.

The Yate-Genieri Link is a friendship Link between the communities of Yate in South Gloucestershire and the village of Genieri in the republic of The Gambia. Established in 1988, it is now a registered charity and is responsible for a number of joint projects with the village. These include:

~ introducing solar-powered lights in every compound

Holidaying in the Gambia?

The best known operator of tours to The Gambia is Gambia Experience which has flights to Banjul from Birmingham, Gatwick and Manchester. www.gambia.co.uk

This is a recognised lodge, 100km east of Banjul, just off the road which leads to Genieri. Its brochure mentions trips to nearby villages of historic interest including Genieri. A google search will throw up a number of reviews, including Trip Advisor,  and agencies running tours using the camp.

If you do choose The Gambia for a holiday, please get in contact with the Link first - you would always be welcome in Genieri, particularly if you live in Yate. We can also recommend a very good tour guide from Genieri who works in Banjul, the capital called Sutay Sanneh who can be contacted on 00220 7704983

BENEFITS TO CHILDREN IN GENIERI AND YATE 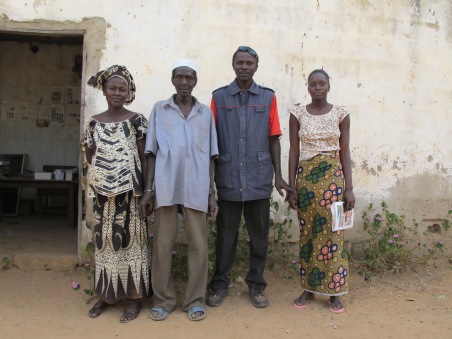 Fund-raising has enabled members of the Committee to take items to Genieri and work with the villagers, including buying materials to furnish and maintain a Day Care Centre for pre-school children in the village. The Link currently funds the salaries for Foday Dampha, the Headteacher, Amie Saidy, Assistant Teacher, and Malaime Sanneh, Caretaker. When funds allow, the Link also provides stationery and in 2014 a computer and printer were purchased and installed, powered by a solar panel on the Centre roof. This enables the village to communicate with the Link in Yate via the internet.

Individuals and organisations in Yate have also contributed many items such as footballs and football kit for the village's very successful team. Most recently, BristolRocks.co.uk contributed money for football nets.

Yate-Genieri Link has paid for leaders of the village, in particular the teachers from the Day Care Centre, to visit Yate. All of them have been to local schools where they have helped to give children and teachers a vivid picture of life in Africa, as well as broadening their own educational skills and experiences.

In 1994, two young people, Anne Bryer and Gareth Hunt from Yate, spent nine months in Genieri funded by the Link, working in local schools and giving individual tuition to young people in the village.

Since 2008 the Link has also been supporting a rolling programme of school sponsorship for children to continue their education at the primary school in Kaiaf when they leave the Genieri Day Care Centre. Each year money is provided to needy families to cover school fees, books and uniforms. There are now 35 children on this programme.

The Yate-Genieri Link runs an annual 100 Club as part of its fund raising programme, specifically to support the Day Care Centre described above. The Day Care Centre acts as a pre-school nursery for all the children in the village up to the age of seven when they start to attend the local primary school in nearby Kaiaf. The Centre not only gives children a head start in school but also provides a safe place for them whilst their mothers work in the rice fields and vegetable gardens.

During the last few years, the Centre has had over 100 children on its register with sometimes 60-70 attending on any one day. Time is spent learning basic literacy and number skills as well as practical skills such as learning how to grow vegetables.

The 100 Club is in its 26th year of operation. It is launched each November and the first draw takes place in January. The monthly draw gives the 100 members the opportunity to win cash prizes. The Club is run in accordance with the rules of "Lotteries" of this nature whereby the total prize money must equal more than 50% of the total annual subscriptions. An individual annual subscription is £10 and so if we sell 100 memberships we raise £1,000 of which £505 is given away in prizes. This leaves £495 for the Day Care Centre. Our Chairman, Secretary and Treasurer may be contacted via:

When buying items through Amazon you can nominate Yate-Genieri Link as the charity you would like to support . Amazon will contibute 0.5%  of the purchases price of your item(s) to us.

You will need to access Amazon via www.smile.amazon.co.uk to nominate us and to make your purchases